On this new year, my friends came to my house at around 1AM (after the fireworks party) and they cooked sausages, chicken popcorns, and chicken wings as our snacks.

We chatted and laughed a lot. We even watched some of our old videos when we were still young and we laughed at them. My friend, Juma, also brought a surprise. He had prepared a video with me as a proposal to his girlfriend, Sherly. So when I let them saw a horror video of mine, the videos changed to Juma’s proposal video. I am uploading the video now on YouTube, will let you all see later. 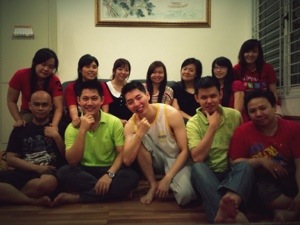 Then we played pig card until 5AM. We played and laughed while playing. Lots of funny things happened during the game as two of my friends got bumps on their legs. We chatted until 6AM until my friend, Ellen, who is living in Korea Yahoo cam us.

Rest of the day I spent with sleeping and sleeping. I even did not take a shower and eat. What a new year! Later that night I went eating with my sister and watched Silent Hill. The next day I got cold and now I still in my recovery mode. I begin the year with cold haha. But I believe this year will be full of prosperity and happiness.

Happy new year and be blessed!

♬ Dance Monkey - Tones and I